In 1985, a geologic expedition aboard the Soviet research vessel R/V Academician Boris Petrov made a surprising find near the Mid-Atlantic Ridge at 14°N: volcanic rocks that popped when they were brought on deck as a result of volatiles in the rocks escaping under the pressure difference between the seafloor and sea surface. A French graduate student named Phillippe Sarda took some of the rocks back to Paris and found not only that the “popping rocks” contained a high percentage of carbon dioxide gas—in fact, they were among the most carbon-dioxide-rich samples ever studied—but that they also contained nearly pristine samples of noble gases (pdf) from deep beneath the surface of the Earth. 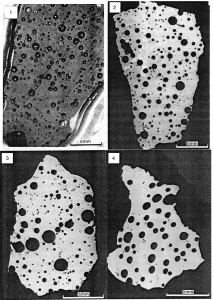 Those basaltic lavas cooled under pressure, and from over 1200°C to near freezing within seconds of erupting onto the seafloor, have a glassy outer layer that traps magmatic gases that would otherwise escape into the water or the atmosphere. Those gases provide an unparalleled view into the composition and conditions of the deep Earth that could help answer some of the biggest questions about our planet’s history and formation, including the origin of the atmosphere and the oceans and the functioning of the global carbon cycle.

The approximate location of the 1985 discovery on the Academician Boris Petrov was published in 1988 by Henri Bougault and colleagues. We now know that this is a complex region of the Mid-Atlantic Ridge that contains heavily faulted terrain with intact blocks of deep crust (called oceanic core complexes), and also areas constructed of young lava flows. The popping rocks come from the boundary between these two very different types of mid ocean ridge.

The goal of this NSF-funded mission is to take the autonomous underwater vehicle Sentry and the human-occupied submersible Alvin, on the modern research vessel Atlantis, back to 14°N to find popping rocks and map the volcanic and structural features of the rift valley.  We hope to better understand the geological history of this portion of the global mid-ocean ridge and the origin of the gases in the popping rocks. We will use unmanned Sentry to make high-resolution maps of the seafloor to help us pinpoint locations for Alvin to dive and retrieve new samples of popping rocks.

We hope to return with new samples and seafloor data that will help answer some very deep questions about the nature of our planet.  This work began with a cruise in March of 2016.  We were excited to find popping rocks on the first dive of the expedition, very close to the 1985 dredge site.  Unfortunately, the ship’s propulsion system developed several problems that required us to cut the cruise short, so we were only able to accomplish about one-third of the work.  With only one engine it took almost two weeks to transit back to the shipyard in Charleston.  During that transit the National Science Foundation (NSF) informed us that they would try to send us back to finish the work.  We are very grateful to the NSF for this opportunity!   We particularly want to thank program officers Candace Major, Donna Blackman, Brian Midson, and Rose Dufour.