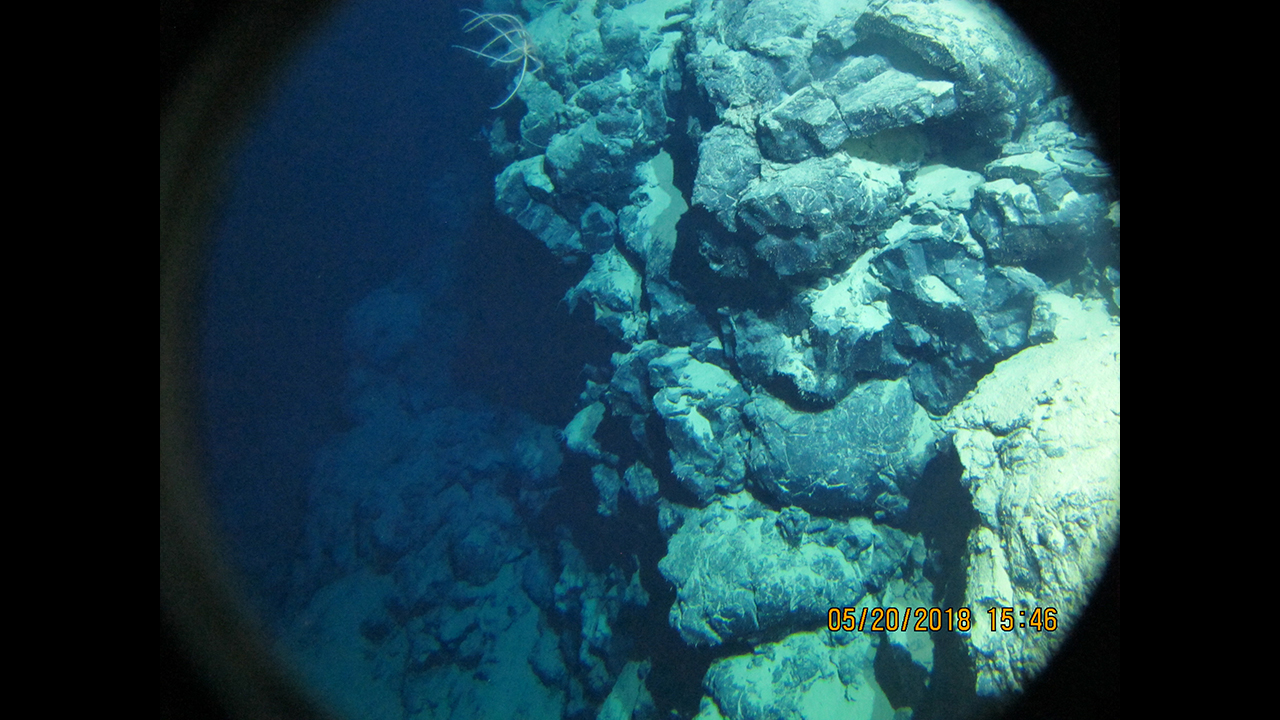 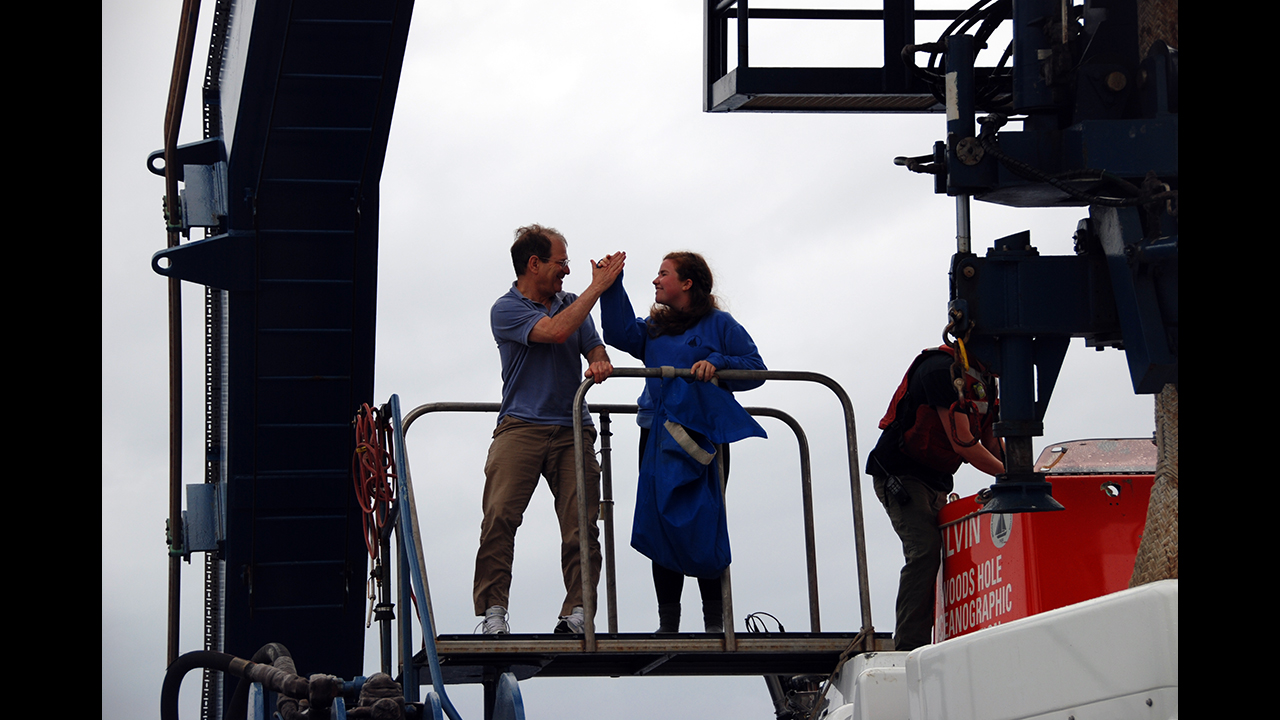 A wall of pillow basalts, as seen from the porthole of DSV Alvin. (Photo by Mark Kurz)
Port and Starboard observers Mark Kurz and Emma McCully celebrating after a successful Alvin dive. (Photo by Danny King)
Being doused in ice water upon completing your first Alvin dive is a highly anticipated ritual. Photos by Danny King

An opportunity to dive in the human-occupied vehicle (HOV) Alvin is as exciting as it is rare. At the start of this cruise, there have only been 4,941 dives in the 50-plus-year history of the sub’s existence.

The number-one question I receive when talking about my research is how I felt during my first Alvin dive. Here, I’ll try to describe that experience.

The morning of your dive is a flurry of excitement and nerves as you try to force down a piece of toast, keeping in mind you’ll be submerged for the next nine hours. After eating, you go to the aft deck of the ship where Alvin is launched. There, you loiter outside the Alvin hanger, bouncing up and down in the swells and watching as the mechanics ensure that Alvin is ready to dive. Slowly, bleary-eyed scientists join you on the aft deck to wish you luck on the dive and to watch you climb down into the hatch. The flash of their cameras and sound of their cheers make you feel on top of the world as you prepare to dive underneath it.

I frequently hear from friends that they would never-ever-in-a-million-years dive to the ocean floor. Whether it’s because the experience is too cramped, too deep, too dark, or too spooky, I understand the hesitation. The only brief moment of hesitation I felt was in the first moment that Alvin was lifted off the deck and I was sitting inside. As the ocean’s waves splashed over Alvin’s portholes I felt a pang of panic. As soon as we regained a little bit of equilibrium, though, the panic subsided and the excitement returned. But that was it for me—one brief moment of feeling like a fish out of water, and I was ready to roll.

As we descended down into the depths, it surprised me how long the sunlight lingered and how calm the waters were just below the surface. The dim light lingered for a surprisingly long time (500 meters) and then the light show began. I pressed my forehead against the porthole, mouth agape, as thousands of bioluminescent creatures floated in front of me. They were forming interconnected networks, giving them the appearance of moving constellations. A lump formed in my throat as I considered how similar these microscopic creatures were to the vast expanse of the universe. It reminded me why I’m so drawn to geology and science in general; the large-scale patterns and features we see at a universal scale can be mirrored under a microscope.

We reached the ocean floor and explored for over 6 hours, traversing over large expanses of sediment and ascending steep cliffs of submarine lava flows called pillow basalt. It felt like only 30 minutes had passed when the pilot radioed up to the ship to alert them we were beginning our ascent. I’m glad the chief scientist thought to take a few pictures inside the sub because the day is a blur of sampling rocks and taking notes. You are surprisingly busy at the bottom of the ocean. Between controlling the exterior cameras, making observations, noting sample locations, and scouting out good outcrops- multitasking is a necessity. I was glad to have the occasional reminder to just look out my window and soak it in.

The age of exploratory science feels historic, but in reality is still essential for the advancement of our field. After all, it was only 40 years ago that Alvin found the first submarine hydrothermal vents on the seafloor. While we use Alvin as a tool to collect data, it is impossible to ignore the magic and awe of seeing the seafloor for the first time. Knowing that you are the first person to see this small corner of the Earth is an honor.

WHOI is the world's leading non-profit oceanographic research organization. Our mission is to explore and understand the ocean and to educate scientists, students, decision-makers, and the public.
Popping Rocks
Copyright © 2021 All Rights Reserved
Privacy Policy.
Problems or questions about the site, please contact webapp-support@whoi.edu