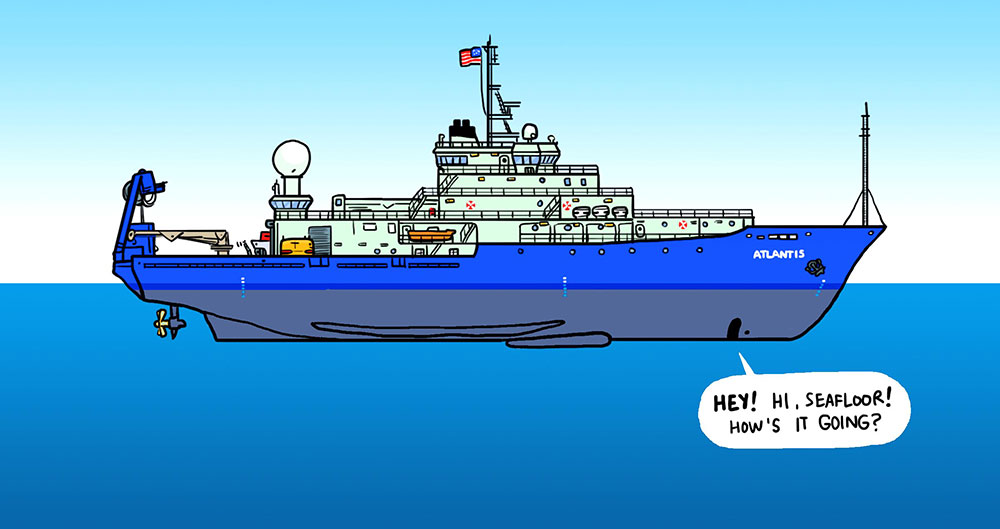 The world’s largest mountain range lies underwater, stretching around the globe like the seam of a baseball. This mountain range, called the global mid-ocean ridge, is the source of more than 70 percent of Earth’s volcanism, hosts a myriad of bizarre underwater creatures, and contains towering cliffs larger than those in Yosemite or Ireland’s Moher. Yet, no one knew about these amazing features until the mid-1900’s.

The development of seafloor mapping techniques transformed our understanding of the world’s oceans, enabling the development of plate tectonic theory and inspiring innumerable other scientific explorations. 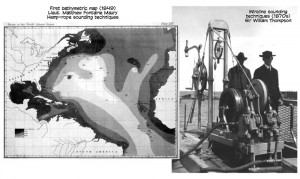 The earliest seafloor mapping techniques involved dropping a weighted rope over the side of a ship. The length of the rope needed to reach the seafloor provided an estimate of the water depth. These techniques enabled the production of the first bathymetric map of the Atlantic Ocean, produced by Lieutenant Matthew Fontaine Maury in 1849. Although a momentous achievement in oceanography, Maury’s map was plagued by inaccuracies. The hemp rope would frequently be drawn sideways by ocean currents and stretched by the bottom weight.

In order to resolve these issues, Sir William Thompson, also known as Lord Kelvin, developed wireline sounding techniques in the 1870s, which more effectively used piano wire and a lead weight. His technique for seafloor mapping remained widely used for nearly five decades until the invention of underwater sonar systems.

The sinking of the Titanic motivated inventors to create acoustic sounders that could detect icebergs. Upon installing these new machines, operators were surprised to discover that they would receive acoustic returns despite the absence of nearby icebergs. These returns came from the bottom of the ocean, leading to the first echosounders for determining seafloor depths.

Echosounders send off an acoustic signal and measure the amount of time necessary for the signal to return to the ship. The distance to the seafloor may then be calculated from this time and the speed at which sound travels through water. 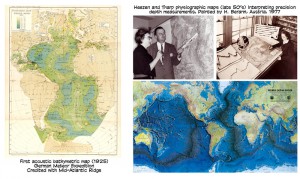 The new techniques enabled the first acoustic bathymetric map of the Atlantic Ocean in 1925 by the German Meteor Expedition, within which the Mid-Atlantic Ridge became clearly visible for the first time.

Information about the depth and shape of the seafloor began to accumulate over the next few decades. By collecting and interpreting precision depth measurements, Bruce Heezen and Marie Tharp at the Lamont-Doherty Earth Observatory produced physiographic maps that clearly showed a mountain range running throughout the world’s oceans—our first sight of the global mid-ocean ridge. Their work spurred debate over the possibility for plate tectonics and continental drift, revolutionizing our understanding of the Earth’s history. 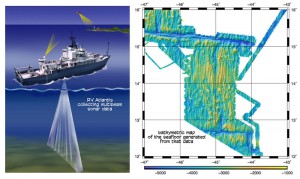 The seafloor mapping systems used today are significantly more advanced than those employed by Heezen and Tharp. Modern systems are able to collect information from a wide swath of the seafloor by transmitting many narrow, stabilized beams. Although these more effective systems have greatly improved our knowledge of the submarine environment, more than 90 percent of the seafloor remains to be mapped. While collecting data onboard R/V Altantis, we are helping to put another small piece in the puzzle that is the Earth’s oceans.